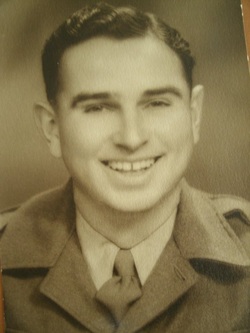 I remember his presence well; the almost giant-like presence, towering over my cousins and me with welcoming hands and a steadfast embrace.  Enveloped in his arms, my world was easy, and fears that often swirl around a young boy’s heart were on pause.  It was much like a dream for me hugging my grandpa, and when you are young, you expect those dreams to last forever.  But like a handful of dandelion seeds must be whisked away by ever moving winds to form new landscape, so must these delicate dreams.

Robert Parent was a medic in the US Army during World War II.  He carried a pistol at his side and was trained on a bazooka, instantly making him a bad-ass in his grandsons’ eyes.  According to my mother, the day he returned from active duty he stuffed his olive green fatigues and military issued accessories in a cardboard box and threw them in the trash, along with any desire to speak of his wartime experiences.  My grandfather knew there were wonderful moments in life from which to create worthy memories; war was not one of them.

There was an annual parade in our hometown celebrating the beginning of an event called the Rose Festival.  The parade (and festival) was one of the largest in the area and seemed to awaken a young and excited spirit in my grandpa. There were numerous rolling vendors selling blow-up hammers, neon light sticks, and other assorted temptations for a young child.  The scores of floats were ornate and striking; transporting local dignitaries and festival queens whose royal designation may or may not have bore a correlation with their level of attractiveness.

The marching bands burst forth with an endless supply of oxygen and drum rolls, as the pimply-faced high schoolers tried feverishly to stay in step with the chubby kid smacking a bass drum beside them.  Every few feet a white polyester leg could be seen falling out of step with its counterparts giving the appearance of a robot soldier losing battery power.

Strategically placed in between the floats and bands, were overweight Shriners performing formations with go-karts.  The merry drivers would awkwardly follow one another in a straight line until they approached a large section of the crowd, break from their lines, proceeding to thrill the spectators with figure eights and turns, all the while narrowly missing the feet of the dazzled children that stuck out from the front row seat on the curb.  And on that curb I would sit enjoying the spectacle along with hundreds of others, occasionally sneaking a glance at my grandpa as he sat in his wooden backed aluminum lawn chair, smiling and puffing away at his Dutch Master cigar.  He would always keep a supply of the cigars in his breast pocket, to keep him company on long walks with his dog Mitzi or while relaxing on his front porch listening to a Red’s game.

Usually about halfway through the parade, a particular float would grab his attention and he would stand up and begin waving excitedly.  The float in question was sponsored by a square dance club and it shook uncontrollably beneath the motion of ten to fifteen stretchy cloth clad dancers with the sole purpose of demonstrating their best promenade…two by two.  The man calling the square dance held a cheap microphone that crackled when he pronounced his consonants and his sing songy, folkster rap would continue the entire length of the parade route.  The reason for my grandfather’s excitement at this moment was that he was good friends with the white haired caller and when the float passed by he would throw my grandpa’s name in the song and dance call:

“Swing your partner round and round, bow to the corner, Hey there’s Bob Parent! Bow to the left, Promenade!”

My grandpa would clap and wave and then plop back down in his chair.  He would look at us all with pride as if the parade for a moment at least, was in his honor.  And maybe it should have been.

My grandpa’s jovial spirit fueled his friendships and interactions.  Rarely would he enter a local restaurant or store without hearing a boisterous “Hey Bob!” Granted, his conversations during these interactions were brief and mostly surface topics, but his welcoming personality and warm laugh made the other person feel as though their words were worth a fortune to my grandpa’s ears.  He had a certain gift for making his friends and family feel on top of the world.

My grandparents played a major role in my early childhood.  Through most of my young life, my mother bore the weight of parenting my brother, sister, and I.  We struggled to say the least, but my mother was resourceful, working hard to keep our hearts filled and stomachs satisfied.  Due to her work schedule, usually consisting of 2 to 3 jobs, it was necessary for me to stay with my grandparents after school.

Their home was filled with warmth, and proudly displayed the wear and tear from countless years of loving and raising children and grandchildren.  My grandma was a wise and kind woman; the type of person who knew how to transform a simple box of macaroni and cheese into a kindergartner’s dream come true.  Her motherly love came naturally and she selflessly gave her love to our family.  At that time, my grandpa worked for a local bank making deliveries.  He would arrive home shortly after the bank closed, around 5 o’clock.

I would wait for this moment the entire afternoon: the huge bear hug from my grandpa.

The prickly 5 o’clock shadow against my cheek…

While in his embrace he would enthusiastically ask my grandma, “Mom, did you see what I got?!” referring to the hug, and the love given by his grandson, the grandson that felt adored by his grandpa’s simple actions.

For a little boy struggling to make sense of his little world which lacks the strong presence of his father, this hug and attention from my grandfather was my compass.  For he was more than just my grandfather: He was a humble war hero and my grandmother’s soul mate.  He was the joyful caretaker of the hearts of his best friends and the ‘unofficial’ grand marshal of the parade.

My grandpa passed away during my senior year of high school from cancer.  I sat by his side along with my mom and brother, the morning he whispered his last breath to the earth.  How such a common affliction could ravage such a unique soul will forever confound me.  During his funeral I grew angry at myself for my lack of tears.  I listened to family members speak of his life and history.  I stared at the empty vessel that was my hero lying in the casket.  I prayed that he was with Jesus.

As we walked by the casket for the last time, I realized the physical comfort my grandpa provided to me was now a memory.  I turned to walk to the back of the church. Tears flooded my eyes at the loss of a beautiful part of my life.  But I know the beautiful flowers can not last forever, there are new fields to grace…new dreams to fill.